Back to REV. ROOSEVELT's story

The Rev. Roosevelt Hardy, Sr., the retired senior pastor of New Bethel African Methodist Episcopal Church (AME) located in Quincy, Florida.
Since 1961, Rev. Hardy has given dedicated, committed and courageous leadership as an itinerant Elder in the AME Church. He formerly served in the following conferences: South Florida, Tampa, Florida and West Florida.
The Rev. Roosevelt Hardy, Sr. was born on June 28, 1934 on a farm in rural Thomas County, Georgia, the son of the late Rev. Willie and Lula (Nee Williams) Hardy. He was educated in the Thomas County Public Schools.
After being called by God, he saw the need to further his education and subsequently enrolled in the Adult Education Center (ACE) in Miami and later attended the South Florida School of Religion in Miami. He also studied at the Gulf Coast Community College Seminary in Panama City.
On June 15, 1952, he married First Lady Dorothy Mae Brown Hardy, formerly of Monticello, Jefferson County, Florida. They have been married for the past 68 years. They are the proud parents of three sons, seven daughters and the proud grandparents of twenty-six grandchildren and a host of great grandchildren.
He faithfully served as Itinerant Elder at the following AME Churches: Mount Herman (Founder), Miami; Saint Matthew, West Dade; Grant Chapel, Lake Worth; New Bethel, Hialeah; Saint Hebron, Quincy; Fountain Chapel, Tallahassee; Saint James, Marianna; Arnett Chapel, Quincy; Payne Chapel, Sarasota; Saint Luke, Tampa; Bethel, Saint Petersburg.
Funeral Services will be held on Saturday, January 25, 2020 at 11:00 a.m. from the Willowhead Missionary Baptist Church, 615 E. Calhoun Street, with burial to follow in the Peaceful Rest Cemetery.
Public viewing will be held on Friday at the funeral home from 12:00-7:00 p.m. with a family hour from 6:00-7:00 p.m. The body will lie in state from 9:00 a.m until the funeral hour with no viewing after the eulogy.
Published on January 24, 2020
To plant a tree in memory of REV. ROOSEVELT HARDY, SR., please visit Tribute Store.

Plant a tree in memory
of REV. ROOSEVELT

A place to share condolences and memories.
The guestbook expires on April 22, 2020. 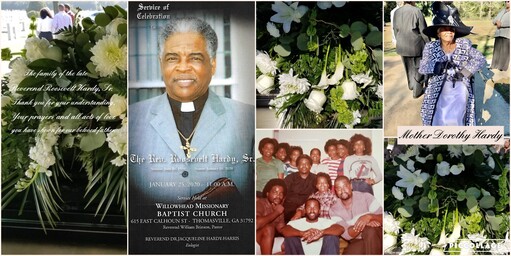 Beloved Daughter Mary Hardy-Williams
May your soul Rest In Peace! I’m thankful for the 58 years❤️ Trust the Lord continually for everything.